The wearing of face coverings is a legal requirement as of 15th June whilst on public transport. This can be a scarf or homemade face mask, but to be effective must be something that can be washed or left alone for at least 3 days.

Hexham, Corbridge, Riding Mill, Stocksfield, Prudhoe, and Wylam all have railway stations on the Newcastle to Carlisle Railway line. Frequencies vary depending on station, but peak time frequencies are usually half-hourly or better. Most trains are currently operated under the Northern brand, with some journeys also operated by Scotrail.

The X84/X85 Tyndale Express branded routes link Hexham and Corbridge to Newcastle. These are limited stop express services, with the X85 also serving Ovington, Ovingham and Wylam. Both routes have a combined half-hourly frequency Monday to Saturday, but there is no X84 or X85 on a Sunday.

There are also a number of smaller routes in and around the Hexham area, and a full summary of routes can be found in the table below. 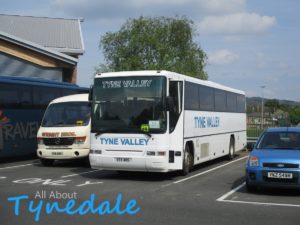 A number of taxi firms operate in the area, including Arran’s Taxis (now part of Blueline), ecoCabs, and Stocksfield Executive taxis.

For large groups, Tyne Valley Coaches, Primrose Coaches, Bells Coaches, and Rowell’s of Prudhoe all provide coaches for private hire. Johnson’s of Mickley and Hillary’s of Prudhoe provide minibuses and coaches upto to 33 seats for hire.

Scott’s Transport Site is the home for information for the transport enthusiast.

Fleet lists, photos, and much more.

To contact us, please email scott@tynedale.org.uk, or find us on Facebook and Twitter. Data collected will be processed inline with all data protection laws applicable to the United Kingdom of Great Britain and Northern Ireland.

I’m currently developing a package of advertising opportunities, to enable local businesses to promote themselves at a low cost (don’t worry, Business Directory listings remain free). I hope to have more details on these available shortly.